Former KISS guitarist Vinnie Vincent returned to the live stage yesterday (on May 28, 2022) at the inaugural Creatures Fest, which took place in Nashville, Tennessee, USA. 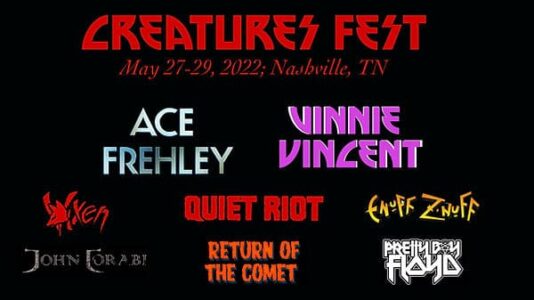 Reports on Vincent‘s performance seem to be mixed with various people providing their thoughts via Facebook.

Dave Bacon Laetare: “Vinnie Vincent show with Ace Frehley and Bruce Kulick. It just ended, and I’m back upstairs. True, you could not record, or take pictures. They were very strict about that. Otherwise…. The show was absolutely amazing !!! (At least in my opinion) All throughout the show you could tell how thankful he was that the audience was enjoying it so much. At the end, he was shaking all the hands that were in reach. Completely amazing show, with all 3 guitarists playing old KISS classics together for the first time ever. (and probably the last) I can not wait until the meet and greet, and pictures with Vinnie tomorrow !!!! I am sorry that only the people in attendance were able to experience it, but I’m so thankful that I was able to.

Drew Griffin: “At CreaTures Fest 2022 in Nashville, Vinnie Vincent, Ace Frehley and Bruce Kulick all played together on Deuce and Cold Gin on a Tank Shaped Stge! No photos were allowed. WOW!!!”

Mark Peace Thomas: “Vinnie Vincent stunned the KISS Army last night by going first. We then waited an hour outside the lobby with many wondering if he would show up. Sounds of a guitar echoed in the hallway as people regained hope Vinnie was there! I thought it was a guitar tech checking sound but sure enough Vinnie wanted to ‘shred” for thirty minutes and he started before we were let in. The doors were opened and the crowd rushed in as Vinnie continued to “shred” from atop an impressive stage ‘tank set” shrouded in smoke.

The fans took their place as Vinnie stood in one spot. Shredding with no music for another fifteen minutes, maybe more. I’m not sure because security have been instructed to eject anyone who took photos or video. Most people are warned, some were removed.

As I watched this spectacle, I was thinking to myself, “are they shooting the second spinal tap?” Vinnie continued his solo proving to the fans that he can play the guitar really fast!

A few years earlier, Vinnie Vincent had played with a band but did not solo turn his three song set. Has Vinnie continued, I figured he was letting the world know that he can play a mean solo for a very long time with no other musicians, no backing track, standing like a statue, just playing in modified KISS makeup.

The tank looked cool but Vinny was higher top and there is no spotlight which gave them an eerie clown like vibe. I imagination got the best of me and I thought to myself this big guy next to me will be who I hide behind in the event that Vinnie started shooting up the crowd. While the situation was quite amusing, the set, the lighting, the smoke, and lack of spotlight on his face made it feel like we were in some type of strange horror movie.

The big dude next to me, turned around, touch me on the shoulder and said “I’m out”. There goes my backup plan I thought. Of course, I was having a good laugh and felt a bit sympathetic towards Vinnie. Based on his behavior, there must be some type of mental illness that he’s never acknowledged.

The shredding continued as many fans watched in confusion.

There were moments where Vinnie stopped and got some cheers and then continued his guitar shredding.

A drum beat started booming around the venue from a pre-recorded track and we heard the famous chant from the song “I Love it Loud”. Who was the unmistakable voice of Gene Simmons blaring over the loudspeakers. I thought to myself “isn’t this the guy that Vinny sued multiple times through the 80s and 90s?”. It was a bizarre choice with so many talented musicians in Nashville, not to mention the “Creatures Fest” itself!

Finally a bass player emerged and he announced a rock and roll party while many of the organizers and some of the band members from the festival began to emerge to sing and cheerlead. The awkwardness was palpable.

The Nashville bass player did his best to try to get the crowd to chant back and while some responded, many still watched in perplexed silence as their guitar hero chose to use a backing track instead of a drummer, or basic rhythm section.

The group on stage we’re doing their best to create a party vibe but Vinnie had failed to make a connection from the start. Vinnie played the rhythm guitar over the backing track. The mystery bass player grooved along. Vinnie played the guitar solo and the song finished.

The announcer hyped Vinnie and then excitedly announced a special guest: Bruce Kulick! It was the first time the replacement for Ace Frehley would play with Bruce,. who played twelve years with KISS without makeup.

Another backing track began and Bruce did his best to figure out when to start the guitar riff for “War Machine”. He played it a couple times and then changed to the transition, oops, that was not the change. You repeated the rhythm section over and over again with the transition riff, waiting for that trumville to go into the verse. Bruce being the pro that he is created a bit of a unusual groove with the riff and lead into the verse, riff and lead into the verse until finally the pre-recorded drums made the transition. Things went relatively smoothly from there.

The song finished and a second guest was now to join what was called “The Holy Trinity“. Ace Frehley, the original guitarist for kISS, the musician Vinnie Vincent replaced was now joining him on stage. The crowd showed more excitement at that moment than any other. It was the three most famous kISS guitarists playing on one stage together!

Another drum track kicked in and Ace began to play “Cold Gin” but it appeared he could not hear the track and quickly the drum beat stopped.

The drum beat came back in and then stopped again. It appeared that the sound guy had played the wrong track, or Ace was not aware of which track was supposed to go first since this was all impromptu.

Third time is the charm as Ace played the chords to deuce and we are now on a roll. It was starting to sound like a real band with vinny, ace, bruce, and the unknown bass player who was actually singing live!

The next song was “Deuce” and the set came to a close. Vinny did not speak a word but did come down from the tank and greeted the fans, put his hand in a prayer like way and bowed and smiled, thanking the audience.

I asked various people how they felt after the show, especially those in Vinnie Vincent t-shirts. Many were speechless, one pleaded the fifth, and some praised it as amazing!

I enjoyed the bizarreness, the expression on Todd Kern‘s face as he sang back up with Vinnie above him in full make-up. Bruce‘s reactions as he skillfully made it happen and Ace‘s casual wisecracks and easygoing stage presence made it a priceless moment in KISSstory!”

Doors opening for Vinnie Vincent, fans rushing in at Creatures Fest on May 28, 2022 (video from Showgirl of Rock‘s YouTube page):

Vinnie Vincent with Ace Frehley and Bruce Kulick performing live at Creatures Fest on May 28, 2022 (video from Ne1ly‘s YouTube page):

Vinnie Vincent at Creatures Fest on May 28, 2022 (video from Almost Human‘s YouTube page):