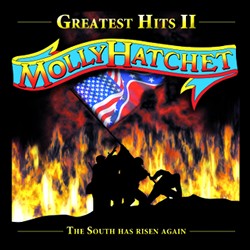 In 1978, the band signed their first recording deal and sold almost a million copies of their self-titled debut release. Molly Hatchet went on tour with Aerosmith and Bob Seeger that same year, and their second album release ‘Flirtin’ With Disaster’ (1979) followed twelve months later. Their third album ‘Beatin’ The Odds’ (9181) was a commercial success, selling over two million copies and entering the Billboard charts at no. 25. The group’s unmistakable trade mark is the warrior who appears on their album sleeves and was designed by the American fantasy artist, Frank Frazetta. Their fourth offering, ‘Take No Prisoners’ (1981), made it directly into the Billboard charts. Two years later, Molly Hatchet presented their exceptional ‘No Guts … No Glory’ (including the anthem “Fall Of The Peacemakers”). Their 1984 ‘The Deed Is Done’ was the first release to meet with mixed reactions. While some attested the album with Molly Hatchet’s typical blues rock and boogie feel, others criticized its all-too-polished sound. However, Molly Hatchet managed to reunite their fan base again with their live cut ‘Double Trouble Live’ (1985), recorded in Dallas and Jacksonville.

Their eighth album, ‘Lightning Strikes Twice’, saw the light of day four years later, followed by an almost seven year sabbatical, which came to an end with ‘Devil’s Canyon’ in 1996. “After all those years, it was still a great feeling to pick up a guitar, connect it to an amp and start playing”, Bobby Ingram rejoiced at the successful comeback. “Devil’s Canyon put us back on the rock music map.”

Two years and countless gigs later, Molly Hatchet presented their eleventh album ‘Silent Reign of Heroes’, followed by an 18-month world tour and the dynamic ‘Kingdom Of XII’. “Silent Reign of Heroes was not really a sinister album, but it did deal with the dark side of the band. ‘Kingdom Of XII’ was pure fun. It’s an album for beer drinkers, for people who enjoy hoisting the rebel flag again,” says Ingram about the two studio recordings. A few weeks after the release, Molly Hatchet were back on stage in Germany to complete the recordings for their live release, ‘Locked And Loaded’ in 2003. Their 2005 album, ‘Warriors Of The Rainbow Bridge’, was released in memory of Bobby Ingram’s late wife Stephanie, and in 2010, five years later, ‘Justice’ showcases Molly Hatchet as a band which fills the spirit of the Southern community with life.