Oxford, UK based rockers Molly Karloff consisting of lead vocalists and guitarist Simon Guilliard, bassist Dan Podbery and drummer Jowie Adkins have released a video for their single “She Said” from their upcoming EP Supernaturalation, which will be available on March 6, 2020. 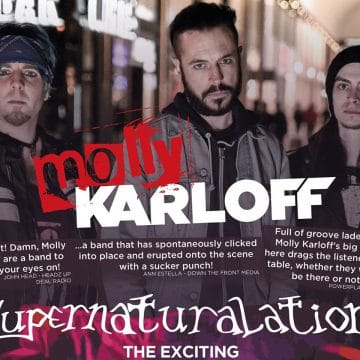 “Molly Karloff are a hard-hitting, three-piece British alt-rock, rock band with an addictive riff-driven, no-nonsense punchy rock sound. They tour the UK with a special EP launch concert at the Black Heart in Camden Town on Thursday February 27th.

“Since the release of their critically acclaimed debut EP, “Dancing For Money” (2018), the Oxfordshire based band have toured their contagiously hook-filled, fist pumping sound around the country, including packed venues across Oxfordshire and London’s Camden Town.

Whether they are playing at rock and metal festivals in Oxfordshire or supporting Oliver Dawson’s Saxon at RockFest, people are talking about Molly Karloff’s addictive riff driven, no-nonsense punchy rock sound in a very positive way.

After the release of the “Dancing For Money” EP, they released a music video for the title track and performed a number of shows to support their release and build momentum.

Within only two short months, the band were headlining their first sell-out show at The Wheatsheaf in Oxford, shortly followed by a joint headline show at the O2 Academy Oxford.

As the band continued to build momentum, they started to catch the attention of the press. Down the Front Media hailing their EP as a “No-holds-barred debut from a band that has spontaneously clicked into place and erupted onto the scene with a sucker punch!”

The press attention escalated on an international scale with Brazilian site, Rock Vibrations, and the US’s Rock-n-Review continuing the superlative-laden praise.

Back home in the UK, vocalist, guitarist and songwriter, Simon was interviewed by Moshville Times as the plaudits continued with Manchester Rocks placing the band’s debut EP in their top 10 EPs of 2018.

The praise continued into 2019 with a glowing review in the May edition of Powerplay Magazine who awarded the EP a rave review. “Molly Karloff have enough balls about them to crash through the barriers and make the rock world take notice,”said Powerplay.