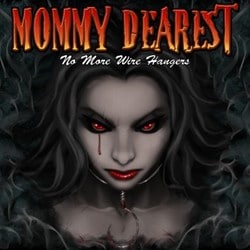 You may know him as the outspoken, outlandish, but never outdone host of the Metal Madman Radio Show, but back in the ’80s/’90s Johnny C., aka ‘The Metal Madman’, was bashing the skins for a New York hard rock/heavy metal outfit known as Mommy Dearest.

Mommy Dearest’s story reads just like that of countless other ’80s-’90s hard rock bands who worked hard, won a few Battle of the Bands competitions, became hometown heroes, got the interest of major label A&R Scouts (in this case Capital Records), got ready to sign a major record label deal, and then overnight watched the whole Hairbanger’s Generation X platform fall out of favor to some grungy-lumberjacks with instruments.

Mommy Dearest, who indeed did take their name from the movie Mommy Dearest, will beat you into submission on their new release ‘No More Wire Hangers’, out on FnA Records (www.fnarecords.net). Twenty plus years in the making, the wait is now over for the legions of ‘Metal Madman’ fans who have been asking for this album to be released. For those not familiar with Mommy Dearest’s sound, the best way to describe it is equal parts Van Halen, Dokken, Great White, and Tesla.

‘No More Wire Hangers’ is a steady delivery of twelve solid hard rock tracks that take you through a rhythmic journey of what most likely would’ve been tracks featured on the band’s major label debut. The album opens up with the Warren DeMartini (Ratt) style guitar-shredding rocker entitled “Lovin’ Child” followed by six more studio tracks including the obligatory ballad “In My Dreams” and the harmonica-laced “Judgement Day”. The eighth track, “Cold Survivor”, was pulled from way deep in the vaults and is a rare basement recording that somehow survived years of relentless inactivity. The album closes with four live tracks that showcase drummer John C’s mighty and powerful drumming and abuse of one set of Tama Rockstar drums.

In addition to checking out the new album ‘No More Wire Hangers’ by Mommy Dearest, ‘The Metal Madman’ invites you to check out his worldwide syndicated radio show that airs every Wednesday from 7-10 PM EST. The Metal Madman radio show plays the best in hard rock, ’80s hair bands, heavy metal, power metal, progressive metal, and instrumental shred (specializing in CD showcases, demos, rare cuts, and more from the well known bands to the insanely obscure). Come see what all the commotion is about. If the live requests, fully interactive chatroom, contests, and worldwide exclusives and premieres don’t win you over, maybe it will be the banter and (M)Attitude as he rips Geoff Tate (Queensryche) a new asshole, rips into Eddie Trunk (That Metal Show) for sucking up to corporate mainstream, or calls out Tommy Lee (Motley Crue) for snubbing his fans.

Whatever you do though, be sure to check out Mommy Dearest’s Rockin’ new release on FnA Records (www.fnarecords.net) and request your favorite Mommy Dearest song on the Metal Madman Radio show at www.themetalmadman.com.