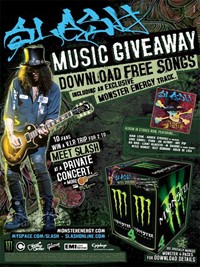 As the highly anticipated Slash solo album hits the digital and real worlds, Slash and Monster Energy are giving fans the opportunity to access exclusive content and register-to-win prizes by logging onto www.monsterenergy.com now through June 30th, 2010. “Slash is synonymous with so many great things in music and the new album continues that tradition,” states Monster Energy Music Marketing Manager, Brent Hamilton. “We are fired-up to be working with him on such a unique program.”

Monster Energy has produced limited edition Slash/Monster Energy “4-Packs” labeled with unique codes that can be used to access free content, including: One (1) exclusive song NOT available on the Slash album, two (2) additional songs from the album, exclusive video content, Slash Ringtones as well as Wallpapers and Screensavers designed by Slash himself. “We are very excited about the partnership with Monster Energy, as it allows us to introduce and distribute Slash’s music to thousands of new retail channels,” said Al Hassas, of The Collective. “As major retailers continue to carry fewer and fewer physical records, this is a great benefit for an artist to have new creative distribution avenues.”

Monster Energy and Gibson Guitars are also working together to give consumers the opportunity to win the ultimate Slash experience with killer register-to-win prizes (no purchase is necessary to enter the sweepstakes): Grand Prize, 5 fans will win a V.I.P trip for 2 to a private concert with an exclusive backstage meet and greet with the Leather clad, Les Paul toting man in the top hat himself, Slash. 1st Prize, 10 fans will win a very limited edition Gibson Appetite Les Paul Guitar and the 2nd Prize, 50 fans will win Slash’s brand new CD, log on to www.monsterenergy.com and rock on!

Just a quick footnote, the “4-Pack” giveaway applies to the U.S. only. But fret not; Monster Energy has made it easy for everyone on this rock called Earth! When fans log onto to the site and enter their country/region, they will be given specific details as to what applies to their region and how to gain access.

Slash Background:
Slash is widely considered one of the greatest rock guitar players of all time. He has received countless accolades and awards including a 2007 star on the Hollywood Walk of Fame alongside his idols Jimmy Page and Jimi Hendrix. An original member of iconic rock band Guns N’ Roses, Slash helped the band create signature sounds like the guitar riff of #1 hit “Sweet Child o’ Mine” and “Welcome To The Jungle.” The band dominated the 1980’s and 90’s music scene selling more than 100 million albums worldwide and ushered in a decade of hard charging rock music. After the band’s break-up, Slash went on to critical acclaim in his personal project Slash’s Snakepit, and global success with supergroup Velvet Revolver. He has been widely sought after by the biggest musicians of all time, performing with everyone from Michael Jackson to Stevie Wonder to Ray Charles. Slash is one of the marquee playable characters in Guitar Hero III, has two signature Gibson guitars in his name, and authored his own top-selling biography Slash in 2007.

Courtesy of www.sleazeroxx.com and www.monsterenergy.com