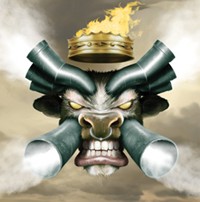 And the lyrics? Wyndorf laughs, “Well, the lyrics read like a fever-dream of life in the 21st century. Cynicism, optimism, satire, sex, deluded fantasies and dead-on reality. They’re all here — sometimes even in the same song! In my world, images, information and emotions tend to intertwine. I’ll describe the smallest details of my personal life in crazy, cinematic terms. When I write, the words play out in my mind like scenes from a movie and that’s the vibe I tried to capture on ‘Mastermind’ — rapid-fire emotion. What can I say? I’m having a weird life and I have to write it down that way.”

“In the end though,” says Dave, “Mastermind ROCKS, and that’s what’s most important.”

Track Listing for ‘Mastermind’:
Hallucination Bomb
Bored With Sorcery
Dig That Hole
Gods And Punks
The Titan Who Cried Like A Baby
Mastermind
100 Million Miles
Perish In Fire
Time Machine
When The Planes Fall From The Sky
Ghost Story
All Outta Nothin’