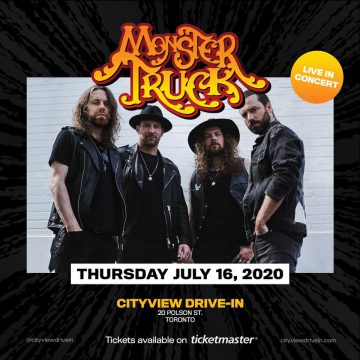 Canadian rockers Monster Truck will be performing a “drive in” concert at the City View Drive-In in Toronto, Ontario, Canada on July 16, 2020.

According to Ticketmaster, ticket prices range from $106.90 to $154.35 for a vehicle with two occupants.

“Who’s got their tickets for our Toronto show at CityView Drive-In on July 16th? WE ARE BACK!!!!!!! Strictly limited to 214 cars only, grab your tickets from www.ilovemonstertruck.com before they are all sold out!”

Sleaze Roxx stated the following in its review of Monster Truck‘s album True Rockers: “Monster Truck continue to evolve and create great new music. This band is one of Canada’s best at this point… while touring heavily in Europe for most of the fall. Local bias aside, I’m confident in recommending this band. Not exactly sleaze as in L.A. Guns, but more like a modern power arena rock.”