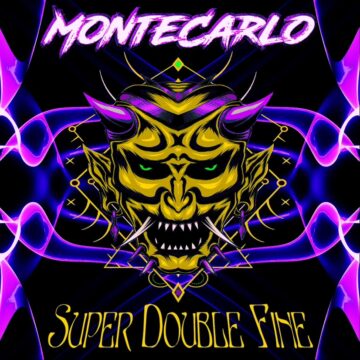 “After dropping a handful of singles, MonteCarlo has officially released their debut album Super Double Fine. MonteCarlo‘s evolution from pandemic project to full blown band has shown the group’s dedication to craft a hard-hitting rock record after spending the last year developing themselves. Super Double Fine includes ten songs, opening with an instrumental track titled “il Ornti” and closing with a cover of Duran Duran‘s “All She Wants Is”.

The namesake of the group is Damian MonteCarlo of MACH22 fame, best remembered by their stints opening for legendary acts Guns N’ Roses and Bon Jovi. MonteCarlo officially consists of Damian MonteCarlo (drums, vocals), Albert Lepore (vocals), Dan Parsels (guitar, vocals), Ahmed Smith (guitar, vocals) and Joe Mal (bass). In MonteCarlo’s words, the band has a “Velvet Revolver meets Alice In Chains kind of vibe” and hones in on Saigon Kick being a major influence of their sound. These musical comparisons are heard throughout Super Double Fine while still maintaining their own original sound.

Damian MonteCarlo on Super Double Fine – “We worked really hard on this for the past year making sure every song is great and there are no fillers. We’re really happy and excited with the outcome and extremely proud of how this record came out. Now we take this on the road, release videos promoting the album and start working on the next record.”

Vocalist Albert Lepore weighs in on the debut album – “Let’s rewind to January 2021 when we released an EP titled Original Sin, kind of a hodgepodge of our writing just to test the waters. We noticed the water was pretty damn warm so we began writing a full length record that we labeled Super Double Fine. With the help of some very talented friends and an awesome engineer, we began to bring the project to fruition and released a single and video for the song “Animal” just to keep the momentum going. Bang! It’s hitting playlists on Spotify and the numbers were way beyond what we imagined. Now it’s 2022 and we’ve released Super Double Fine – we have a full line-up getting ready to hit the stage and kick some ass.””