The Moonstone Music Festival, which was set to debut on Saturday, April 30, 2016 and Sunday, May 1, 2016 with headliners, KISS and Def Leppard, along with popular hard rock acts such as Buckcherry, Queensrÿche and Steel Panther, has announced that it will be postponed until September 24 and 25, 2016 due to cyber fraud. 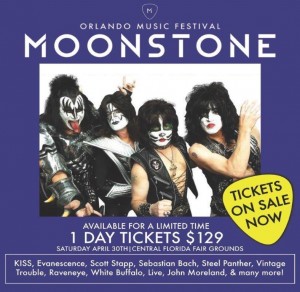 The following announcement was made on Moonstone Music Festival’s Facebook page earlier today:

“PRESS RELEASE: INAUGURAL MOONSTONE MUSIC FESTIVAL POSTPONED DUE TO CYBER FRAUD RESCHEDULED DATES OF SEPTEMBER 24 AND 25 TO INCLUDE UPDATED LINE-UP

The inaugural MOONSTONE MUSIC FESTIVAL–which was set for April 30 and May 1, 2016 in Orlando, FL at the Central Florida Fairgrounds–the multi-stage, live music celebration will now take place this fall, September 24 and 25, with an updated line-up featuring available acts on the original bill. Despite the efforts of the festival promoters, the date change is based on the company suffering from a major cyber fraud crime. An ongoing investigation in now in process–by local law enforcement and the FBI–of cyber fraud involving a major Tampa, Florida bank and other local businesses.

“At this time, we need to focus our efforts on this investigation,” says Paul Lovett, MOONSTONE founder. “Because of this situation, we know our attention to the inaugural Moonstone might suffer and we want to ensure an amazing experience for everyone who attends the festival in September.”

Tickets purchased for the original dates will be honored (with upgrades for all purchasers, details of which will be announced in the coming weeks) with refunds available for those unable to be on hand for the rescheduled dates.

Stay tuned for the updated line-up and additional details on the rescheduled MOONSTONE festival.”