The Orlando Music Festival Moonstone is set to debut on Saturday, April 30, 2016 and Sunday, May 1, 2016 with two of the biggest hard rock acts ever — KISS and Def Leppard. The Moonstone Music Festival will be held at the Central Florida Fairgrounds in Orlando, Florida, USA and will be hosted by special guest Eddie Trunk. The festival’s line-up also includes popular hard rock acts such as Buckcherry, Queensrÿche and Steel Panther.

Sleaze Roxx readers can get $10.00 off tickets for the Moonstone Music Festival by using the code SLEAZEROXX when purchasing tickets. 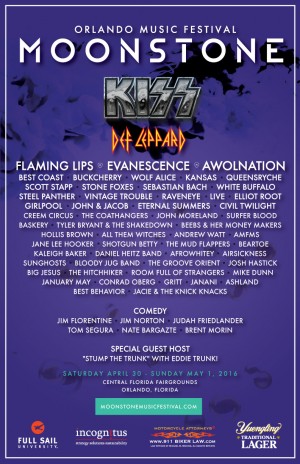 Speaking exclusively with Sleaze Roxx, the Moonstone team stated: “The festival is being produced by Incognitus. Paul Lovett, a partner at Incognitus, came up with the idea of Moonstone Music Festival. The name ‘Moonstone’ was chosen for the festival because the moonstone is the Florida state gem. The moonstone is a gem that stands out and draws attention, and that is what we are doing with this festival. The musical acts and attractions we have lined-up are unique and draw attention.”

In terms of landing big names such as Def Leppard and KISS for the festival’s inaugural edition, the Moonstone team advised: “It’s all about who you know, and the experience you are offering. We knew we wanted to do something huge for the Orlando debut of Moonstone Music Festival, so we are starting it off with a bang.” With respect to the festival’s line-up, the Moonstone team stated: “We definitely have a few more acts up our sleeve. Connect with us on Facebook and Twitter to be the first to find out when more bands will be announced.”

The Moonstone Music Festival will apparently have six different stages. The Moonstone team advised Sleaze Roxx how this would work when it stated: “Our largest main stage, the Moonstone Stage, is going to be the place to catch main acts such as KISS and Def Leppard. We also have a Sunset Stage, which is a brand new amphitheater that will be built on the Orange County Fairgrounds specifically for the event. The vibe of this stage will take guests back to the days of the classic L.A. Sunset Strip of the 80s. We will also have a Full Sail Stage, which features an assortment of acts from the college rock genre. All acts scheduled to play the 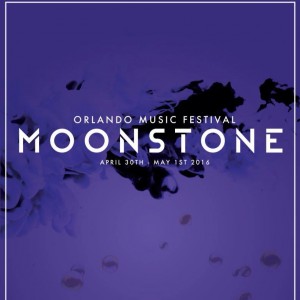 Full Sail Stage were picked by the music business students at Full Sail University, and are all Moonstone approved. All these stages are going to feature different styles of the rock genre. We really wanted to focus on the essence of rock, and highlight that lifestyle. But we don’t just have music, there is going to be an assortment of other entertainment as well. One of our entertainment stages is called, The Laugh House. This stage is going to be a comedy stage featuring comedians such as Jim Florentine, Jim Norton, and Judah Friedlander. We also have a stage called, The Art House, which will feature live art, and we have Freak Show Alley, which will be an assortment of freaky entertainment. These stages are going to be a unique addition to the atmosphere, and provide our guests with top notch entertainment. The festival and its stages are going to provide entertainment from all aspects, and keep the guests surprised and entertained all weekend long.”