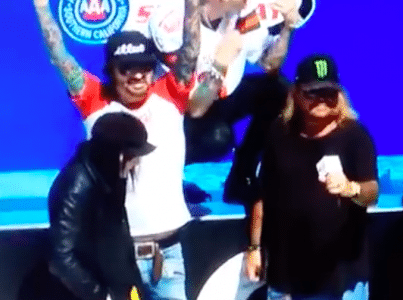 Mötley Crüe consisting of bassist Nikki Sixx, singer Vince Neil, drummer Tommy Lee and guitarist Mick Mars made what can only be dubbed a now rare promotional appearance together today at the NASCAR event at the Auto Club Speedway in Fontana, California, USA to presumably promote the movie The Dirt, which will be released on Netflix on March 22, 2019 and which is based on the band’s best selling autobiography The Dirt: Confessions of the World’s Most Notorious Rock Band.

The four band members along with actors Machine Gun Kelly (who portrays Lee in the movie) and Douglas Booth (who plays Neil in the movie) all screamed together the ‘most famous words in motor sports’: “Drivers! Start Your Engines!”

Mötley Crüe have released two songs so far — “The Dirt (Est. 1981)” featuring Machine Gun Kelly and their cover of Madonna‘s “Like A Virgin” — from their upcoming The Dirt Soundtrack, which will also be released on March 22, 2019 as the soundtrack for their Netflix movie The Dirt.

Mötley Crüe along with Machine Gun Kelly and Douglas Booth at the NASCAR event in Fontana, California on March 17, 2019: