Mötley Crüe, Def Leppard and Poison rumoured to tour together in 2020

Was it a slip of the tongue? Black Crowes manager Mark Didia was interviewed on the Howard Stern Wrap Up Show earlier this week and reportedly stated that Mötley Crüe, Def Leppard and Poison would be heading out together in 2020. Didia‘s remark is apparently at the 25 minute 42 second mark of the Stern episode. Didia‘s comment was first reported by journalist Mitch Lafon on his personal Facebook account but the post has apparently been subsequently deleted.

Back on October 31, 2019, Radar Online reported that Mötley Crüe had been offered a $150 million Live Nation tour if a few conditions were met regarding singer Vince Neil and drummer Tommy Lee. 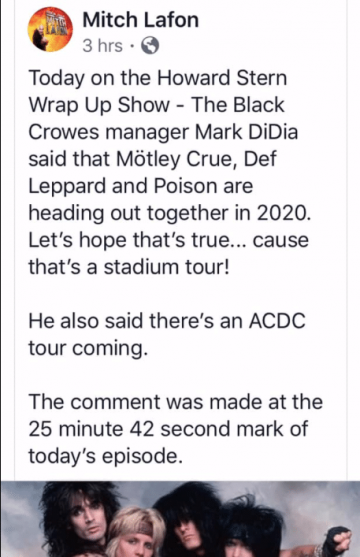 About a week later, Neil tweeted a message on his Twitter account that suggested that he was denying the rumours from Radar Online. Neil emphasized that there was no tension between him and Lee but specifically didn’t comment on the rumoured Live Nation tour.

Singer Bret Michaels has repeatedly stated in recent interviews that Poison will be touring once again in 2020 and in one instance, he indicated that he was working really hard to put together an incredible Poison tour with other bands.

In an interview with Eddie Trunk on the latter’s Trunk Nation show on SiriusXM Volume on September 25, 2019, Def Leppard frontman Joe Elliott talked about his 2020 touring plans for his band Down ‘n’ Outz while briefly mentioning Def Leppard‘s 2020 touring plans as well. Elliott stated (as indicated on Def Leppard UK‘s website): “Not yet no. But in fairness I haven’t had time. I know this year’s a no no. Early next year’s tricky. There is a possibility before Leppard start next summer where we might be able to do some late Spring/Early Summer stuff. So the further away it is the more chance I’ve got to say don’t book anything yet. These things are already booked for these guys.”

Back in December 2011, Mötley Crüe and Def Leppard toured together, along with Steel Panther, throughout the UK, with Def Leppard closing out / headlining the shows on those tour dates.