While most tours running into June 2020 have already been cancelled or postponed, the people behind the blockbuster summer tour known as The Stadium Tour and featuring Mötley Crüe, Def Leppard, Poison and Joan Jett & The Blackhearts refuse to make an official decision on whether the tour will proceed or not. The Stadium Tour is scheduled to run from June 18, 2020 to 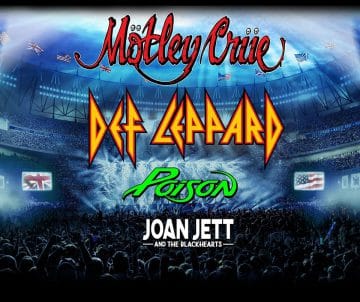 Back on April 1, 2020, Sleaze Roxx announced that The Stadium Tour slated for this summer was reportedly cancelled based on information provided by Dirty Skirtyfrontman Luke Stephens.

The following joint statement has been provided by the four main bands on The Stadium Tour and states (as posted on Mötley Crüe‘s Facebook page earlier today):

We wanted to reach out to all of our amazing fans and let you know that we’ve been hard at work preparing an amazing show. Our priority during this unprecedented time is to make sure that we are being as thoughtful and responsible as possible in the decisions we are making regarding The Stadium Tour and that we are putting the fans’ health, well being and safety first and foremost. We are currently weighing all options and are awaiting further direction from the powers that be. Our goal is to have an official update to everyone by June 1 outlining exactly how we will proceed. In the meantime, stay safe and healthy. We can’t wait to see you all again.