Is a new Mötley Crüe album or at least a song on the way? That’s certainly a legitimate question after a photo was posted on the band’s Facebook page yesterday of drummer Tommy Lee and bassist Nikki Sixx along with producer Bob Rock with the caption “28th August 2018.” 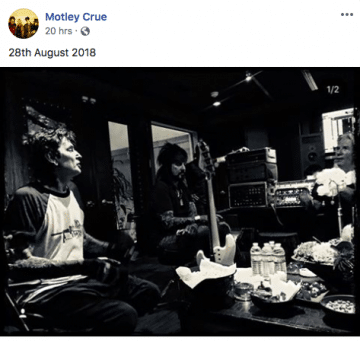 Back in April 2017, a rumour surfaced that Mötley Crüe were apparently working on a “top secret” new album and planning a tour to follow for sometime at the end of 2018 despite having previously signed a contract never to tour again.

Sixx quickly denied that Mötley Crüe were getting back together with the following message that was posted on his Facebook page on April 30, 2017:

“FYI..A radio station recently posted a bullshit article that is getting picked up by the press because the press only wants “press” SAD…MOTLEY is not getting back together…I wish the press had more credibility and wouldn’t shit on fans feelings…Anything to get someone to click on their website so they can sell advertising…SAD.. The press is suppose to report the news not make up gossip or spread it….”

Perhaps Mötley Crüe are working on one or more new songs to add to another greatest hits collection to coincide with the release of the movie The Dirt. Only time will tell.