“BIG NEWS…2 songs out on Friday! 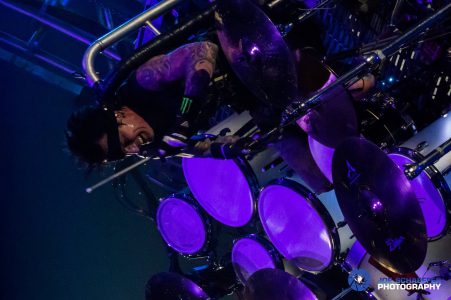 Pre-save to hear them first: linktr.ee/tommy_lee”

“Lee came back once with Mötley Crüe to go on the Crüe’s Greatest Hits tour in 1999. With the popularity of rap metal, he formed a band called Methods of Mayhem. The band released a self-titled album the same year and toured in support of it. Although Lee distanced himself from Mötley Crüe after splitting, he agreed to take part in the band’s 2001 autobiography, The Dirt. In addition to Mötley Crüe and Methods of Mayhem, Lee has made guest appearances on albums by other artists, such as Stuart Hamm, Nine Inch Nails and Rob Zombie. He also contributed a song, “Planet Boom” (originally on Mötley Crüe‘s Quaternary EP) to the soundtrack of then-wife Pamela Anderson‘s 1996 movie, Barb Wire, and produced an album for the pre-Goldfinger project from John Feldmann and Simon Williams, the Electric Love Hogs.

Lee parted ways with Methods of Mayhem partner TiLo and began recording with members of Incubus. He then released his first solo album. The album, 2002’s Never A Dull Moment, has tones of rap metal and electronica. The song “Blue” features guest vocalist Rodleen Getsic (the credits read: “Rolleen”). In August 2002, Tommy Lee and his solo band joined Ozzfest, mainstage.

In 2006, he formed a new band called Rock Star Supernova with Jason Newsted (ex-Voivod, ex-Metallica) and Gilby Clarke (ex-Guns N’ Roses). The 2006 season of Rock Star selected Lukas Rossi as the lead singer for Supernova. Dilana, Magni Ásgeirsson, and Toby Rand with his own band Juke Kartel were the three runners up and accepted an offer to go on tour with Supernova. The self-titled debut album Rock Star Supernova was released on November 21, 2006.

Lee released his autobiography, Tommyland and his second solo album, Tommyland: The Ride in 2005. The CD featured as a soundtrack to the book and includes the singles, “Tryin to be Me”, “Good Times” which was the theme song to his reality TV series Tommy Lee Goes to College and “Hello, Again” which features Andrew McMahon from Something Corporate and Jack’s Mannequin. Lee was also a guest DJ at WXRK “K-Rock” in New York during the Fourth of July Monster Metal Meltdown in 2005.

He also recorded drum tracks for the alternative rock band Jack’s Mannequin, which has released the album Everything In Transit….

Tommy Lee‘s current artistic endeavors include touring as an electronic dance music DJ with his Methods of Mayhem DJ/production partner, DJ Aero (birth name: Chester Deitz). As DJs, they are also known as Electro Mayhem and have clocked over 60 club dates as DJs throughout North America (with stops in the Bahamas and Central America) in 2007 alone. Lee and Aero debuted as DJs on the mainstage at Ultra Music Festival during Winter Music Conference (WMC) in 2004.

Lee and Aero have been DJing together since 2000…. In 2009, Lee appeared in select cities with Sharam, one half of Grammy-winning Deep Dish, accompanying Sharam live on the piano during his house DJ sets. Lee and DJ Aero also accompanied deadmau5 in his 2011 Meowington Hax tour. He played keyboards too with Deftones at a benefit show for now deceased bassist Chi Cheng in 2009….

In 2014, Tommy Lee joined the Smashing Pumpkins to perform drums for their Monuments To An Elegy album….”