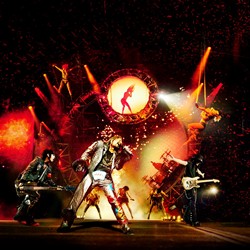 Motley Crue have entered Tommy Lee’s Atrium studio this weekend to work on their first new recording since 2008’s ‘Saints Of Los Angeles’.

Said bassist Nikki Sixx, “Writing lyrics right now for new Motley Crue. Got a nasty little song that we’re thinking would be perfect to rev up your engines for summer. We are cutting drums, bass and guitars this weekend at Tommy’s studio. This one is a panty dropper for sure… I was just thinking, I’ve been writing music for most of my life and it still feels fresh every time I pick up the pen, guitar or bass.”

Motley Crue recently completed their successful 12 date Las Vegas residency at The Joint in Las Vegas’ Hard Rock Hotel & Casino, although Sixx isn’t sure how much longer the band will go on. In December he told Sleazeroxx.com, “I don’t think this band was meant to last and we’ve lasted way longer than anyone ever expected us to. For us it’s about trying to find the right time to end it (the band) correctly. We’ve had that talk as a band and even in the last year or so we’ve spoken that at some time we’re going to want to wrap this up. I feel really proud of the band but we are taking steps to finish the movie and when we do we’ll look at that time. When the movie (The Dirt) comes out it’ll be time to finish on a high note, on a positive, and not like we’re breaking up. I think that’s a good thing and will probably put us about 35-years which is a long time for a rock band which is cool. We’re not sad, we’re happy.”

Nikki Sixx will also be making his acting debut in the movie Shooter, a film that explores the fine line between being human and fulfilling your objectives, in which the bassist will play the role of the adulterous scoundrel.