Rather than try to put any rumours to bed with respect to any future touring, Mötley Crüe appear to be endorsing and pushing the rumours that they will be touring again possibly in 2020.

Earlier this week, Black Crowes manager Mark Didia was interviewed on the Howard Stern Wrap Up Show and reportedly stated that Mötley Crüe, Def Leppard and Poison would be heading out together in 2020. 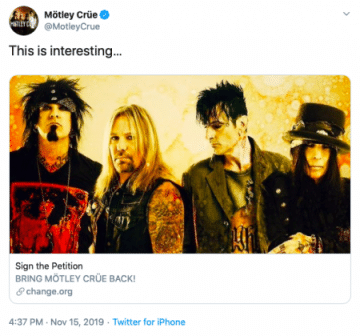 Yesterday, rather than put such a rumour to bed by denying it, a tweet emanated from Mötley Crüe‘s official Twitter account (see below), which sees the group promoting an online petition from “Motley Mann” that wants them back on the road. The petition had 10,144 signatures as of press time for this article.

After breaking the replay button on “The Dirt” film, it is clear to me that the only way to fulfill my urge for the Crüe is for you guys to get back on the road. I know it’s not just me with this opinion; your movie has once again put you in the spotlight and built an entire new generation of Crüeheads who have a NATURAL BORN RIGHT to see you on stage. If the rumors circulating about a Mötley Crüe comeback are true, then let this petition solidify it. The new fans need a new tour, PLEASE COME BACK.

For those who are too young to remember: Mötley Crüe is an American rock band formed in Los Angeles, California, in 1981. The group was founded by bassist Nikki Sixx and drummer Tommy Lee, lead singer Vince Neil and lead guitarist Mick Mars.

They recently came back to fame with the Netflix Biopic ‘The Dirt‘ which has sparked the fan base to increase streams on platforms such as Spotify dramatically recently. Bringing back memories for older fans and bringing the band into the spotlight for new fans alike.”