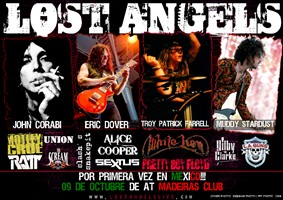 Last September, Lost Angels performed its inaugural shows in India along with visiting a hospital for children with cleft lip and palate, donating proceeds of their shows to help aid in surgeries and research. They also performed their first shows in the USA with many shows in the Midwest anchored by the world famous Milwaukee Summerfest this past summer.

In an interview with Sleaze Roxx earlier this year — https://sleazeroxx.com/interviews/troy-patrick-farrell-interview/ — drummer Troy Patrick Farrell said the Lost Angels is “a band that hopefully will only do special gigs here and there. There is an abundance of ‘All Star’ bands out there, some all intertwined and incestual, it can get into the ‘joke’ range of things… and not that this is any more special, we’re just trying to keep it from being so played out. We do songs from each of our catalogs, of our associations, and songs we all dig. We’re doing some Queen, Thin Lizzy, David Bowie, and of course some John Corabi, Alice Cooper, Jellyfish, Slash’s Snakepit etc. It’s a good time with three of the best singers out there. It’s a little known fact that Muddy (Burning Tree, L.A. Guns, Gilby Clarke) has got quite a set of pipes on him too!

I generally handle the business and (try to) make the tour make sense. Muddy is the music director and Dover and Corabi sort of dictate the songs as they have to sing the majority of them. It just seems to work out for us and I’m looking forward to the eight or so shows in a row we have. The ‘India’ run was just a little taste and sort of a first run for Lost Angels. I expect when we go back, it will be 10 times better.”