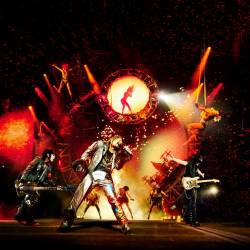 Motley Crue Offering Up Some “Sex” Later This Month

Motley Crue will be releasing their new single, entitled “Sex”, on July 17th and will debut the track on Sirius XM radio four days earlier. The release of the song, the band’s first studio material since 2008’s ‘Saints Of Los Angeles’ album, coincides with the band’s co-headlining tour with KISS that begins on July 20th.

The song was recorded earlier this year at Tommy Lee’s Atrium studio. At the time bassist Nikki Sixx said, “Got a nasty little song that we’re thinking would be perfect to rev up your engines for summer. We are cutting drums, bass and guitars this weekend at Tommy’s studio. This one is a panty dropper for sure… I was just thinking, I’ve been writing music for most of my life and it still feels fresh every time I pick up the pen, guitar or bass.”

KISS and Motley Crue announced in March that they were uniting to launch the tour of 2012. The summer’s biggest, baddest rock tour will level 40+ cities nationwide.

With combined album sales of almost 200 million, KISS and Motley Crue are more than just iconic; they remain today as the dominant powerhouses of rock music tallying 30+ chart-topping hits, countless sold out tours and awards and accolades from around the world. Known for their elaborate and spectacular stage shows, each band plans to give fans the ultimate summer concert experience with the most impressive lighting and sound production ever and their signature over-the-top pyrotechnics. This is the first time KISS and Motley Crue will share a stage since 1982.