Sleaze Roxx stated the following in its review of the movie The Dirt: 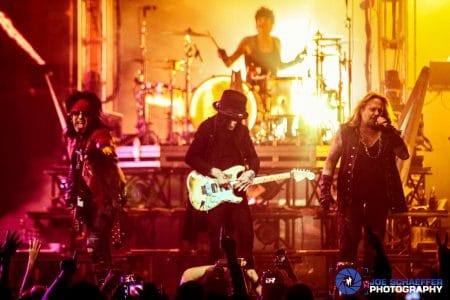 “Whether you want to admit or not, Mötley Crüe have been trendsetters in the hard rock / heavy metal world. They were really as far as I can recall the first sleaze rock band to really breakthrough and come out of the Sunset Strip with their self-released album Too Fast For Love back in November 1981. Mötley Crüe were the first sleaze / heavy metal rockers to adopt a very glam look during their Theatre of Pain era in 1985, which seemed to influence just about every major heavy metal band to do the same thing from Ozzy Osbourne to KISS to Iron Maiden to Judas Priest. While all these bands were transitioning into a softer sound and glam look, Mötley Crüe were already transitioning back to a harder look and sound with their Girls, Girls, Girls album.

With the release of the movie The Dirt, the Mötley Crüe band members are once again leading the pack by having actors portraying themselves in a movie. The Dirt movie may well start a flood of movies of the same kind and we will have Mötley Crüe to thank in that regard, and I am looking forward to it! I readily admit that I was skeptical about The Dirt movie but I have got to say, it is a brilliant film that had my attention from start to finish. I was a little sad to see that the movie ended just as singer Vince Neil returned to the band after John Corabi‘s stint since I wanted the movie to continue but at the same time, that was a logical place to end it. If anything, The Dirtmovie made me remember how much I liked Mötley Crüe during their Shout At The Devil era, how much I love (and still love) the music from their first two studio albums, and it changed my current mental picture of the band members back to the time of their heyday.”

Mötley Crüe‘s “Looks That Kill” video with The Dirt footage: