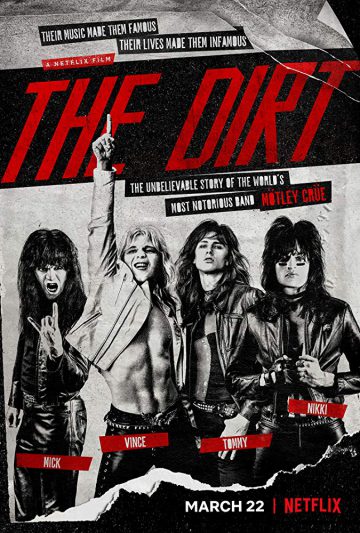 Mötley Crüe consisting of bassist Nikki Sixx, lead vocalist Vince Neil, drummer Tommy Lee and guitarist Mick Mars have released a video for their song “Same Ol’ Situation (S.O.S.)” from their album Dr. Feelgood and to promote their The Dirt Soundtrack and the movie The Dirt, which outlines the band’s story.

Sleaze Roxx stated the following in its review of the movie The Dirt:

“I don’t want to say too much about the storylines in The Dirt movie because I truly hope that everyone will take the time to see it. I will say that I really liked how the film gave me a much different impression of Mick Mars than I had had throughout the years. The Dirt movie shows Mars as someone who was instrumental in some key decisions for the group early on and that’s simply not how I have pictured his legacy over the years. I did read the band’s best selling autobiography The Dirt: Confessions of the World’s Most Notorious Rock Band but that was over 15 years ago now so unlike other Crüe fans, I don’t remember a lot of details of that book. The movie’s portrayal of Ozzy Osbourne is absolutely hilarious and really illustrates how the Prince of Darkness was even crazier than all of the Mötley Crüe band members put together. There is one section in the movie where Tommy Lee takes you through a typical night for him on tour and you wonder just how these guys (including Nikki Sixx who went to a very dark place with his heroine use and abuse) ever survived all that abuse on their bodies.

Overall, I give two big thumbs up to The Dirt movie. The film puts the glory days of ’80s heavy metal back in the spotlight and that is a wonderful thing in my eyes. It was a special crazy time that will likely never be duplicated and it was fun to take a trip once again on the ‘wild side’ via Mötley Crüe.”

Official music video for ‘Same Ol’ Situation (S.O.S.)’ by Mötley Crüe with additional footage from The Dirt.Stream or Buy ‘The Dirt Soundtrack’ – https://mot…