Mötley Crüe reminisce about debut gigs from back in 1981

It’s hard to believe that Mötley Crüe started almost 40 years ago but the group has just reminisced on its debut gigs, which occurred 37 years ago. 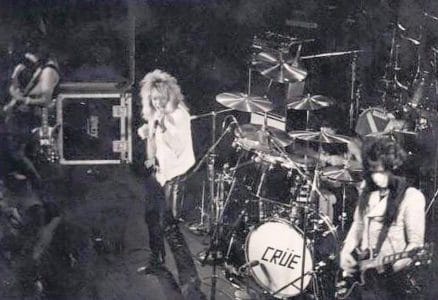 “This week in 1981 Mötley Crüe performs their debut gigs, opening two sold-out shows on the same night for Oakland’s Yesterday & Today (Y&T) at the Starwood on the corner of Crescent Heights and Santa Monica Boulevard in West Hollywood. Nikki organised the support slot with the owner David Forest, who also managed his previous band London. The band staples posters on walls and lampposts around Hollywood to promote their shows and Nikki’s rule is if a band has one poster, Mötley needs four. #mötleycrüe“

A couple of years ago, LA Weekly ran an article on Mötley Crüe‘s first gig, which states in part:

“In The Dirt, Neil recalls the first song Mötley played at their Starwood debut as being “Take Me to the Top,” the dark, shifting rocker that in November 1981 would appear on their debut LP, Too Fast for Love, released on the group’s own Leathür Records imprint. Other songs Mötley played that night included pre–Too Fast single “Stick to Your Guns” and a pair of tunes never issued on a proper album, “Why You’re Killing Yourself?” and “Nobody Knows What It’s Like to Be Lonely.” There were also covers of The Raspberries’ “Tonight” and The Beatles’ “Paperback Writer.” They were an opening act, so their whole set would have lasted only about 30 to 45 minutes….

The band wasn’t exactly sure what songs they’d play that night, until Sixx taped a scribbled set list on the stage right before they began. They hadn’t run through their entire set in rehearsals yet, a practice the band continues to this day.”

You can read the rest of the article / interview at LA Weekly.