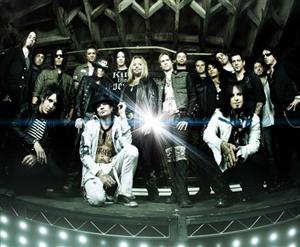 Inspired by the energy and experience of their performance with their Crue Fest cohorts Buckcherry, Papa Roach, Sixx:A.M. and Trapt at the press conference to announce their upcoming summer tour, Motley Crue extended the production for their upcoming CD, returning to the studio this week to record one more track for their first studio album in over a decade, Saints of Los Angeles. The album, which has a new release date of June 24th, follows the story of the band’s NY Times best-selling memoir The Dirt, a no-holds-barred tell-all that features every gritty detail of the group’s exploits as one of the world’s biggest rock bands.

Says Sixx, “Before our performance at the press conference, we were firing on all cylinders at sound check just jamming out, and that’s when the new idea came. We quickly laid it down and went to the studio to record it, and liked it so much we pushed back the release one week so that we could get it onto the album – it now has 13 tracks. It’s the ultimate song to end the record with and begin the new chapter of our career.”

Produced by Live Nation, Crue Fest is a touring rock festival embracing the lifestyle of rock. With the lineup including Motley Crue, Buckcherry, Papa Roach, Sixx:A.M. and Trapt, “Crue Fest ’08” will undoubtedly be the summer’s loudest show on earth. The trek kicks off July 1st in West Palm Beach, Florida and works its way across North America for over 40 dates throughout July and August. Tickets, band profiles and exclusive content from all of the Crue Fest bands will consistently be uploaded at www.therockvine.com.