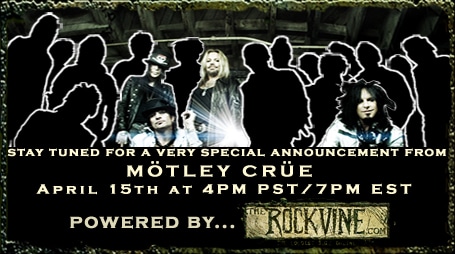 Motley Crue are back! Hear their first song in more than ten years at AOL Music.

It’s been more than a decade, but all four original members of Motley Crue are back together in full force. ‘Saints of Los Angeles’ is the title track and lead single off the notorious rock band’s new album due this Summer. With its powerhouse hook, the track aims to prove that the gang is still on top of its game, rocking harder than ever.

Also, on April 15, Motley Crue will be making “this year’s biggest rock announcement” in LA. Keep checking out therockvine.com for more details.

For those that are having trouble with the AOL Music feed, here is the complete song from Youtube: