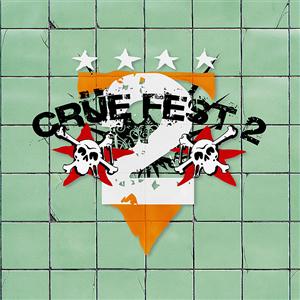 Motley Crue announced today they will perform the entire album, Dr. Feelgood, from beginning to end at every performance on their Summer festival tour, Crue Fest 2. This year marks the 20th anniversary of the release of Dr. Feelgood, which became the Crue’s first #1 album on the Billboard charts. To celebrate the anniversary, the band plans to theme the second edition of their festival tour with imagery inspired by Dr. Feelgood. Motley Crue will reveal details of the tour at a major press conference from the Fuse TV studios on March 16th in New York City and Fuse will air press conference highlights at 9pm ET/PT that evening.

Pre-sale tickets for Crue Fest 2 are available to the public today. Visit www.CrueFest2.com for details.

Eleven Seven Music/Motley Records will re-release Dr. Feelgood later this spring. Originally released on September 1, 1989, Dr. Feelgood reached #1 on the Billboard Charts and went on to sell more than 7 million copies worldwide, producing 5 Billboard Hot 100 hits. The title track which reached #7 on the Hot 100 and earned the band their first two Grammy nominations (Best Hard Rock Performance: “Dr Feelgood” in 1989 and “Kickstart My Heart” in 1990).

Notes Motley Crue’s Nikki Sixx, “On this summer’s Crue Fest we really wanted to give the fanssomething they’ve never seen before. And since its the 20th Anniversary of the release of Dr. Feelgood, we figured what better way to celebrate than to play it live TOP TO BOTTOM every night.”

HEAR THE ENTIRE DR. FEELGOOD ALBUM ON IMEEM
Go to the site to hear the record and to embed the player on a site of your choice.

For more information on Motley Crue and Crue Fest 2, visit:
www.motley.com and www.myspace.com/motleycrue