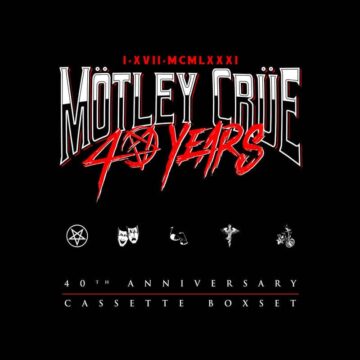 Diehard Mötley Crüe fans will likely be pleased that they will be able to purchase a 40th Anniversary Cassette Boxset containing cassettes of the band’s first five albums released from 1981 to 1989.

The following message was posted in part on the group’s Facebook page earlier today:

Head to recordstoreday.com for more information on the RSD Drops Lists and to find a participating record store near you!”

Record Store Day‘s website indicates in part (with slight edits): “An Exclusive set of five cassettes to commemorate the band’s 40th Anniversary. This set includes their core catalog titles (Too Fast For Love, Shout At The Devil, Theatre of Pain, Girls, Girls, Girls, and Dr. Feelgood) with artwork. This product is an Exclusive, limited run for RSD Drops.”