Legendary sleaze rockers Mötley Crüe have announced today via their website that they will be releasing a full length concert film of their final performance. The band’s website states: 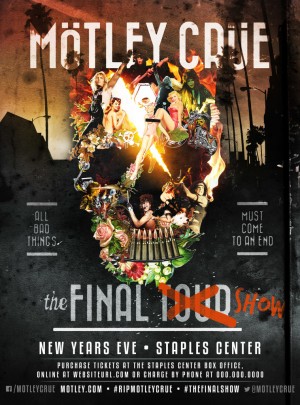 “Iconic, veteran rockers MÖTLEY CRÜE will play their final two shows of their thirty-four-year-long-career tonight and tomorrow at Staples Center in their hometown of Los Angeles. To celebrate their mark in rock music’s history and in honor of their devoted fans, the band announces a full length concert film of the final performance, which will also include exclusive interviews and behind-the-scenes footage of the last week of the tour, to be released in 2016! After thirty-four years performing together, the Final Tour has seen the band perform all across the globe, visiting an impressive 5 continents since July 2014 (North America, South America, Europe, Australia and Asia) for a total of more than 164 shows. Fans alike will be able to enjoy and/or relive the spectacular and cutting edge production elements of the Final Tour, such as Tommy Lee’s “Cruecifly” drum roller coaster, Nikki Sixx’s fire spitting bass performance, along with all the fan-favorite hits!

Christian Lamb has been tapped to direct the concert portion of the film, while Jeff Tremaine, creator of the Jackass series, is confirmed to direct the documentary segment. Produced and distributed by Live Alliance, the film will premier in theaters worldwide, as well as via Pay Per View in all cable/satellite/digital formats.

ABOUT MÖTLEY CRÜE
Hailing from Los Angeles, CA, the quartet—Vince Neil (vocals), Mick Mars (guitars), Nikki Sixx (bass) and Tommy Lee (drums)—has commandeered the rock pantheon for over 30 years. In that time, they have accumulated worldwide album sales exceeding 80 million, seven platinum or multi-platinum albums, 22 Top 40 mainstream rock hits, six Top 20 pop singles, a star on the Hollywood Walk of Fame, three Grammy nominations, four New York Times bestsellers (including the band’s biography, THE DIRT) and countless sold out tours across the globe, playing to millions of fanwas the first rock band in history to have completed an epic sold-out Las Vegas residency at The Joint at Hard Rock Hotel & Casino. The band continues to remain on the forefront of entertainment reinventing themselves via not only their music but also their mind blowing live shows featuring never seen before elements, such as Tommy Lee’s 360 drum roller coaster. Mötley Crüe was featured in KIA MOTORS’ award winning 2012 Super Bowl commercial.”

After a rocky first night on July 2, 2014, Mötley Crüe‘s Final Tour has to be considered a resounding success with the band selling out virtually all venues that it played.