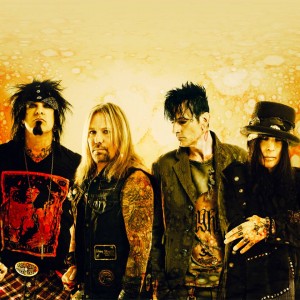 With the legendary Mötley Crüe‘s “All Bad Things Must Come To An End” final tour nearing its end, Mötley Crüe have released a behind the scenes video into the pyrotechnics and drummer Tommy Lee‘s “Crüecifly” roller coaster ride.

Mötley Crüe only have four dates left for their final tour. The group will be playing at the MGM Grand Garden Arena in Las Vegas, Nevada, USA on December 27th and three dates (December 28th, 30th and 31st) at the Staples Centre in Los Angeles, California, USA.

The band’s four original band members have reportedly signed a contract stipulating that there will be no further tours under the name Mötley Crüe but the actual contents of the contract have not been publicly revealed.

Pyrotechnics and the Crüecifly: Mötley Crüe on the Final Tour

In this episode of Anatomy of a Show we meet up with Nikki Sixx, Tommy Lee, and the Mötley Crüe crew on the last leg of their final tour to talk about the ev…