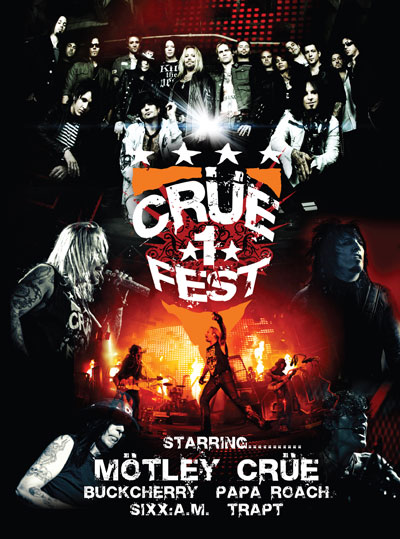 The DVD chronicling Crue Fest 1, the most successful Rock Festival of the summer of 2008, has debuted at #1 on the Billboard Top Music Video Chart. The Crue Fest 1 DVD brings the amphitheater experience into the home giving fans a unique look at the tour on stage and behind the scenes. The DVD release comes just weeks after the announcement of the highly anticipated Crue Fest 2 tour, starring Motley Crue along with Godsmack, Theory of a Deadman and Drowning Pool and introducing Charm City Devils. Produced by Live Nation, the tour kicks off July 19th in Camden, NJ and concludes September 5th in Darien Lake, NY.

Filmed with 15 high-definition cameras at the Molson Amphitheatre in Toronto on August 28th, 2008, the Crue Fest 1 DVD showcases rock icons Motley Crue sharing the stage with Buckcherry, Papa Roach, Sixx:A.M. and Trapt. The electrifying show attracted half a million Rock fans to Live Nation amphitheaters and arenas in 40 cities across North America. In addition to the live concert experience, the DVD takes the viewer backstage for a first-hand look at the debauchery that is backstage on a tour fronted by the world’s most notorious rock band.