Back in mid-November of this year, Black Crowes manager Mark Didia was interviewed on the Howard Stern Wrap Up Show and revealed what Mötley Crüe wanted to keep under wraps until yesterday’s SiriusXM press conference at Hollywood Studios — namely that Mötley Crüe, Def Leppard and Poison would be heading out together in 2020. 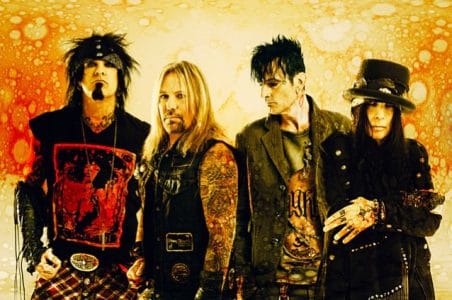 There had already been one earlier “leak” on October 31, 2019 when Radar Online reported that Mötley Crüe had been offered a $150 million Live Nation tour if a few conditions were met.

A few days later after Didia‘s perhaps inadvertent announcement, Mötley Crüe made what appeared to be a hastily made announcement on their website that they were blowing up their “cessation of touring agreement” due to the “relentless” demand from a “whole new generation of Crüeheads” spawned by the success of the Netflix released movie The Dirt. Sleaze Roxx noted in its article in that regard that, “This press release gives the impression that this is not how the band members envisioned revealing that they would be touring once again after playing their last farewell show at the Staples Center in Los Angeles, California, USA back on December 31, 2015.”

Yesterday during the “big” SiriusXM press conference that involved all of the members from Mötley Crüe, Def Leppard and Poison, bassist Nikki Sixx was asked about Didia‘s comment from a couple of weeks back. Sixx indicated (as reported by Variety): “We would have announced it here, the way it should have been. It was announced by The Black Crowes manager, which I heard their tour was just cancelled and he got fired, unfortunately, but that doesn’t affect our stadium tour.”