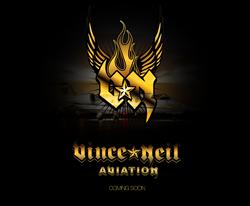 Robin Leach of LasVegasSun.com reports that Motley Crue rocker and hometown hero Vince Neil rolled out his new airline fleet this morning, and with its rock and roll-themed furnishings and painted flames fuselage, he’s all set to ensure that there are music flights in the friendly skies from now on. Vince showed off his first three jets: a Hawker 700, a Lear 35 and a Gulfstream.

Vince told me: “They are all now finished, all tricked out. We will base Vince Neil Aviation at McCarran Airport’s Signature Terminal. The Hawker will hold eight passengers and fly nonstop Las Vegas to New York. The Lear holds seven but will make one fuel stop en route to New York. All three are perfect for short, fast hops from Las Vegas to Phoenix, Aspen, California cities, Mexico and Canada. In fact, I took the Gulfstream down to South America for our last tour, and we stopped in Aruba for a few days’ vacation on the way home to Vegas.”

Vince provides the pilots and flight attendants for the private charter trips, and although his wife Lia and best girlfriend Marley Taylor of Zowie Bowie fame appear in the brochures, they won’t be onboard as flight attendants!

Vegas DeLuxe will have the full behind-the-scenes photo shoot with Vince and his planes, cars and bikes next week during production of the new promo video and sales brochures for VinceNeilAviation.com, which will be fully operating in the next 10 days. His new single from the upcoming album Tequilas & Tattoos hits radio stations April 6, but you can get a sample of the song and the video at VinceNeil.net. Hackers broke into his Web site and stole the early unfinished song and video, so he’ll post the official completed versions next week.