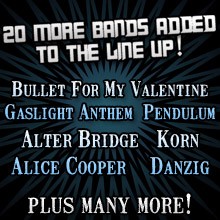 It’s the announcement you’ve all been waiting for – the Download Festival have just gone and added 20 more bands to the line up!

Legends of the classic rock fold will be back on the scene at Download this year – the Thin Lizzy boys are back in town, LA glam-rock stars Buckcherry return, as well as American ‘jam band’ Clutch, Brit rockers FM and Mr. Big.

The list goes on! Master of theatre and horror Alice Cooper will be at Download in 2011, along with Korn, Danzig, The Cult, GWAR and Masters Of Reality.

Truly something for everyone!

These acts join headliners System Of A Down and Linkin Park, plus Avenged Sevenfold and Rob Zombie.

Weekend tickets and RIP packages for Download (at 2010 prices) are on sale now – click here to get yours!