Mr. Big frontman Eric Martin is planning on touring throughout the United States of America in 2020. The singer just announced a number of acoustic tour dates and will be accompanied by Trixter bassist PJ Farley and drummer Bens Hans. 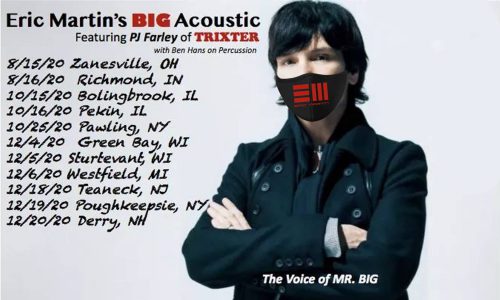 The following message was posted on Martin‘s Facebook page yesterday (with slight edit):

“Some of my dear friends think I’m bat shit crazy to do these shows and some have already given me last rites but the show must go on…trust me we are going to keep it safe ..with your help-

Martin‘s “Biography” on its website indicates (with slight edits) the following about the singer’s start of his musical career: “Eric Martin started his career singing at the end of the 70’s for a San Francisco band called 415. With 415, Eric played hundreds of shows opening for established act like Billy Squire, Hall & Oates, Journey, ZZ Top and Foreigner to name a few. 415 was signed to Elektra/Asylum Records and “Sucker For A Pretty Face” was released after a name change to the Eric Martin Band (EMB). The band parted ways after returning from a 1984-85 ZZ Top tour. After the break up, Eric continued to belt out songs and in 1985 and 1987 released “Eric Martin” and “I’m Only Fooling Myself” solo efforts, which are lathered with Eric’s signature soulful voice and candid lyrics. In 1988-89, Eric would team up with Billy Sheehan, Pat Torpey and Paul Gilbert to form Mr. Big. They would enjoy enormous success with the release of six studio albums, numerous hit singles and six top-selling live CD’s. All combined, worldwide sales top the seven million mark. Eric’s third solo album, “Somewhere In The Middle” was written during the two-year hiatus from Mr. Big and released in 1998 in Asia and Europe.”