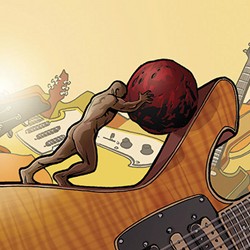 Mr. Big guitarist Paul Gilbert will release ‘Stone Pushing Uphill Man’ on August 5th through Shrapnel Records. The new solo album is a guitar-oriented instrumental record on which Gilbert covers some of his favorite songs, using his guitar like a voice to convey a wide range of emotions, while retaining his signature cutting-edge solo work.

Following Gilbert’s last highly successful CD ‘Vibrato’, ‘Stone Pushing Uphill Man’ is the next important chapter in this amazing guitarist’s career. Regarded internationally as one of the greatest players in the industry, Gilbert once again proves why he is the guitarist’s guitarist.

Starting his recording career with Shrapnel Records as a teenager in the late ’80s, Paul Gilbert has remained one of the most active guitarists from the original shred guitar scene, stemming from his multi-faceted talent and long-range career. With platinum success, including a number one song with Mr. Big, and cult status as founding member of the legendary and highly successful underground progressive metal band Racer X, Gilbert’s sales draw from more than 20 albums and more than 20 years as a recording artist and touring musician. Paul has toured on the legendary G3 tour in support of Joe Satriani and once again confirmed to a younger audience what Gilbert fans have known for over 20 years: that Paul Gilbert is simply one of the greatest guitar players on the planet today.

When excitedly discussing his newest record, Paul said, “For my new ‘Stone Pushing Uphill Man’ album, I decided to bring my guitar to the forefront and let it sing. To do this, I used the inspiration of my favorite singers. Paul McCartney, Steven Tyler, Elton John, James Brown, Sting, k.d. lang, and more. These voices are always in my head. With my guitar I could finally reach their high notes. The challenge was to match their emotion and expression. This was my goal as a guitarist. ‘Stone Pushing Uphill Man’ is the first big step to truly find my voice on the guitar. I wanted the inspiration of my favorite singers for such a big challenge, so I chose a lot of cover songs. I think listeners will be surprised at what I’ve been able to do with the guitar.”