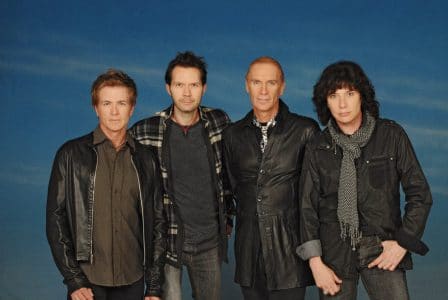 Great news for Mr. Big fans as the band’s guitarist Paul Gilbert recently posted a YouTube video on April 16, 2017 where he provides an update of the status of the band’s next studio album.

Gilbert states in the video (as transcribed by Sleaze Roxx): “Hey everybody! This is Paul Gilbert. I’m in the recording studio making a brand new album with Mr. Big. It’s turning out great. Can’t wait for you to hear it! Rock n’ roll!… I think I got here on Monday and so, Monday, Tuesday, Wednesday, Thursday. It’s the fourth day of recording. Well, three and a half as I got here in the afternoon on Monday. I think we already have like six songs recorded and urrr, its just going great. We’ve got Kevin Elson producing which is fantastic. Our original producer of the classic Mr. Big albums like Lean Into It, Bump Ahead, Hey Man and of course the first Mr. Big album. It’s great to be back with Kevin and all original members — we’re having such a good time. Matt Starr is helping out on drums as well. He’s played great. Really have good time.”

Blabbermouth has indicated earlier today that Mr. Big‘s new studio album will be called Defying Gravity and will be released via Frontiers Music Srl tentatively this fall.