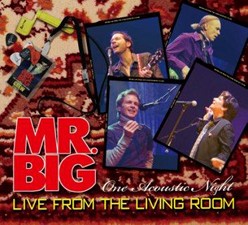 Frontiers Records is pleased to announce the release of Mr. Big’s new acoustic live album ‘Live From The Living Room’ on February 24th 2012 in Europe and February 28th in North America.

At the end of January 2011, during a week long promotion trip to promote for their latest reunion album ‘What If’ and tour, Mr. Big were invited to the WOWOW TV Studios in Tokyo to perform a special show in an intimate setting.

When the talk of a broadcast first came up, the band wanted to present something different than they’ve ever done before. Thus the idea of an acoustic show came about and a string quintet was brought in to enhance the project even more, with arrangements provided by Takashi Miyazaki. Although Paul Gilbert and Billy Sheehan hooked up electric on a few songs, the show was still very much acoustic in nature throughout. Pat Torpey played various acoustic percussion instruments during the gig.

In Eric Martin’s words “The idea for the show came out of a quick conversation the four of us had after a day of interviews promoting the new ‘What if’ CD. We did an acoustic show at the Hard Rock cafe in Singapore in 1996 that (till this day) is one of my favorite live recordings. It had a stripped down, up close and personal feel to it. If we were going to do something like that again it would have to be extra special. We were talking about the old days when musicians used to live together in a band house and practice day & night. Our favorite rock band posters and tapestry’s adorning the walls, family hand me down furniture, amps that doubled as lamp stands, friends hanging out and the usual cluttered mess on the floor, lyric sheets, guitar cases and chords, music stands, beer cans, pizza boxes, wine bottles etc. ‘Live From The Living Room’ was born out of that. We wanted to recreate a harmonious atmosphere and treat our fans to an informal jam session of songs from the past and present while throwing in a few surprises from our wish lists (Strings, Japanese taiko drums). Mr. Big fun fact — it was recorded live in front of a small but intimate audience at Tokyo studios where great movies like Seven Samurai, Godzilla and hundreds of other legendary Japanese films were made.”

The result from that magic night in Tokyo is now here: 10 Mr. Big classics in a completely new and fresh dress and a portrait from the very first ever acoustic show from the band.

Mr. Big’s latest album ‘What If’ saw the band come back in the original line-up featuring singer Eric Martin, guitarist Paul Gilbert, Billy Sheehan on bass and Pat Torpey on drums. The album charted in several European countries in the week of release and went gold in Japan.

‘Live From The Living Room’ will be exclusively released in a glossy digipak and will include the following songs:
Undertow (MP3 sample)
Still Ain’t Enough For Me
As Far As I Can See
Voodoo Kiss
Take Cover (MP3 sample)
Around The World
Stranger In My Life
All The Way Up
To Be With You (MP3 sample)
Nobody Left To Blame

It is now possible to listen the first single “Undertow” on the Frontiers Records Webradio at www.frontiers.it/webradio, for other information visit www.mrbigsite.com and www.frontiers.it.