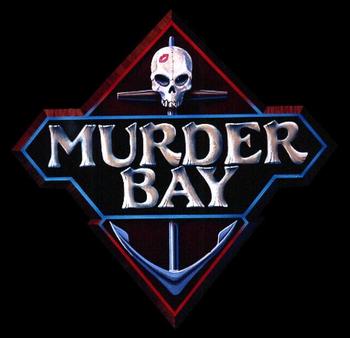 The long awaited Eric Valentine produced Murder Bay 6 Song EP is now available on iTunes at this link, so if your cassette version has died or sounds like an underwater version, please go download a copy while they are fresh out of the oven!

Eric Valentine went on to become a multi-platinum record producer, who began his career as drummer & producer in the heavy metal band T-Ride and has subsequently produced albums for artists such as Lostprophets, Taking Back Sunday, Nickel Creek, Queens of the Stone Age, Third Eye Blind, Smash Mouth, and The All-American Rejects.

Murder Bay was one of the top San Francisco Bay Area bands during the late 80’s early 90’s. They headlined many shows at clubs like the Omni in Oakland, the Stone in San Francisco, and were a regular at Niles Station in Fremont. If you combined some early Van Halen, with some Guns and Roses attitude, a little dash of some Aerosmith, Bad Company and Whitesnake, a smidgen or two of The Scorpions, and add a little bit of funk, you would cook up the Murder Bay sound.

Murder Bay came very close to signing a major label deal in 1990, but the changes the label requested (demanded) didn’t sit well with the band so they passed and decided to move to LA and stir up the strip a little! Unfortunately though, the sound that labels were looking for was changing rapidly as the Seattle Grunge sound began to take hold and the days of tight leather pants, big hair, big guitars, and big vocals were pretty much over.

Like many bands during that transition period, Murder Bay tried to adapt to the new look (less expensive to be sure) and sound, but the labels were just not even paying attention to bands in the LA area as their eyes and ears were focused on the new music mecca of the world… Seattle Washington. So like many great bands that were never given the chance to be heard by the masses, Murder Bay called it quits and went their separate ways.