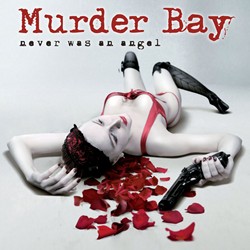 Murder Bay was one of the top unsigned rock bands of the late ’80s and early ’90s, packing clubs from Los Angeles to their hometown of San Francisco’s East Bay. Together with Eonian Records, Murder Bay will be releasing ‘Never Was An Angel’ on April 10th, a collection that features thirteen re-mastered tracks.

When asked why the band decided to finally release these recordings John Link told Sleazeroxx.com, “I had many offers in the past from various labels, but at the time felt like I could just do it on my own. However despite my best intentions, I just never got it done because I was so slammed with my full-time job and raising my family. When Stephen Craig of Eonian Records reached out to us, and we got to know him, it just all started to click — especially when he mentioned he had this guy named Rob Beaton that would do the re-mastering, because the last seven songs we ever professionally recorded were done by Rob!”

“Rob did a great job re-mastering all the tracks”, continues Link, “and Stephen’s graphic artist extraordinare, Eddi Calzada of Suicide Graphix, was awesome to work with as we came up with a unique album design based around a murder mystery that makes the album a little more interesting and fun to look at.”

For pre-order information, and a sample of the track “Land Of Plenty”, visit nightmarerecords.com. You can also check out several more Eonian Records releases at www.eonianrecords.com.