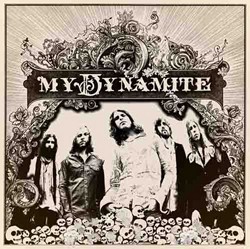 My Dynamite Set To Release Self-Titled Debut In June

Physical copies of My Dynamite’s self-titled debut album will be available on June 19th through Listenable Records. Originally released in March as a digital download, CD copies of the Australian quintet’s debut can now be pre-ordered at shop.listenable.net.

My Dynamite bring a range of influences including blues, soul and classic 100% rock ‘n’ roll to the band, making for a unique and potent brew that is all their own. Taking cues from the sounds of the Humble Pie, The Faces, and The Black Crowes, with a healthy dose of Led Zepplin-esque rock riffs and Rolling Stones attitude thrown in for good measure.

My Dynamite — consisting of Patrick Carmody (vocals), Jorge Balas (guitar), Travis Fraser (bass), Simon Aarons (drums) and Benny Wolf (guitar) — is akin to a monolithic orb of white light and electric energy. A congregation of highly tuned frequencies that weave and dance across your inner mind — a living temple of radiant power. A vehicle for the Shining Ones to manifest into your astral plane, to uplift and rid you of burden and sorrow, and ultimately make you wanna shake your ass!

Visit My Dynamite at www.facebook.com/mydynamite.