Former Slash Puppet frontman Mif will be releasing a new album for his new project My Insane Friends on June 6, 2016.

Sleaze Roxx readers will remember Slash Puppet for landing the #7 spot on Sleaze Roxx’s Top Ten Albums of 2007 with their No Strings Attached album. 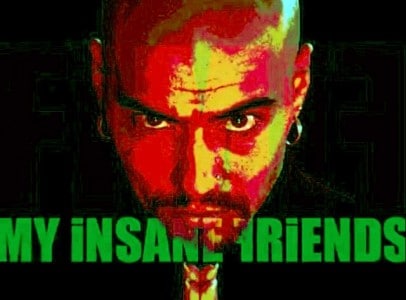 Sleaze Roxx had the following to say in its review of No Strings Attached: “Let me tell you right now, these guys have more than one trick up their sleeves. In this case there are eight of them, eight songs that grab you by the balls and completely rock. If you haven’t heard Slash Puppet before (in which case you should rectify that situation immediately) imagine Skid Row music being sung by a gruff throated frontman. Even though the music is top-notch, it really is the voice of Mif that takes Slash Puppet over-the-top. He has one of those unique voices custom made for hard rock, at times sounding like a more accessible version of Ratt‘s Stephen Pearcy.”

Slash Puppet was a little known Canadian band that made some great music before getting swept under the rug by the grunge invasion. Formed in Toronto, Ontario by Mif (vocals), Frank Bartoletti (guitar), Lou Garscadden (guitar), Pete Dove (bass) and Franklin Wyles (drums), Slash Puppet would play their debut show on October 1989 at Rock ‘N’ Roll Heaven. In one short year they managed to win the Toronto Music Awards’ “Best Club Act” and are quickly picked up by Rush‘s management and signed to a production deal with Sony/Anthem. The band released their first video, “Slow Down” to MuchMusic in mid-1991 which helped sell over 2,500 copies of their independent demo. A year later they were in the studio recording a six-song EP. Eventually, sensing a musical climate change, Mif announced he was leaving the band to pursue an acting career and Slash Puppet performed four final shows before breaking up. Mif ended up releasing an album with THD in 1996. 2007 saw the release of No Strings Attached, a collection of some of the band’s earliest works.

MY INSANE FRIENDS FEATURING FORMER SLASH PUPPET FRONTMAN MIF TO RELEASE DEBUT ON JUNE 6TH, 2016.Slash Puppet were a fixture on the Canadian scene from 1989 -…