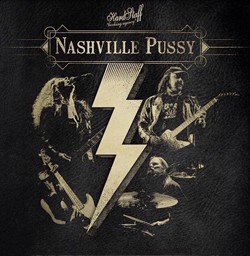 One of the most unusual and charismatic rock acts of our time, Nashville Pussy has released their latest studio album ‘Up The Dosage’ via SPV/Steamhammer. In support of the new CD, the band has announced a North American tour beginning this May.

The tour kicks off on May 21st in Charlotte, North Carolina and runs through June 21st in Chicago, Illinois. The tour sees the band supporting their friends The Supersuckers as well as playing headline gigs with support coming from catl and The Yawpers.

In other Nashville Pussy news, the band has just released a new iPhone app. The app, which can be downloaded here, is the official mobile app for Nashville Pussy. The band manages this app and fans can access Nashville Pussy songs, music videos, live interviews, news releases, upcoming live events and more. Interact with the band and other fans from around the world. Receive local venue and ticketing information via push notifications for upcoming Nashville Pussy concerts near you. Quickly add concert details directly to your smartphones calendar, buy tickets or invite your friends to attend the concert with you through Facebook or email.

‘Up The Dosage’ picks up seamlessly where their 2009 release From ‘Hell To Texas’ left off. And what is more: their five-year hiatus seems to have done frontman Blaine Cartwright (vocals, guitar) and Ruyter Suys (guitars) good — all 13 new songs (plus two bonus tracks) sound like they were catapulted into to the public from a fountain of youth, rocking in typical Pussy style. ‘Up The Dosage’ features the first recordings from new bassist Bonnie Buitrago who took over the bass player duties from Karen Cuda.

Rick Beato, known for his production work with Shinedown, mixed the album. He also is responsible for writing the current #1 Song on the Billboard County Chart “Carolina” by the band Parmalee. In a recent review Sleaze Roxx said, ” Up The Dosage is a sleazy, heavy-grooved, explosive, and boisterous effort that encompasses elements of Let It Bleed, Ace Of Spades, Never Mind The Bullocks, and Highway To Hell — it’s that magnificent.”