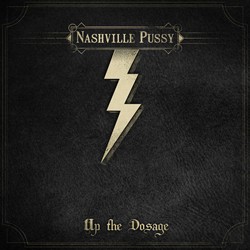 Nashville Pussy To ‘Up The Dosage’ In January

One of the most unusual and charismatic rock acts of our time have announced the release of their latest studio album in January 2014 through Steamhammer/SPV. More precisely: the American quartet Nashville Pussy are set to present their new studio recording ‘Up The Dosage’ on January 21st in North America, in Germany on January 17th and Europe on January 20th.

‘Up The Dosage’ picks up seamlessly where their 2009 release ‘From Hell To Texas’ left off. And what is more, their five-year hiatus seems to have done frontman Blaine Cartwright (vocals, guitar) and Ruyter Suys (guitars) good — all 13 new songs (plus two bonus tracks) sound like they were catapulted into to the public from a fountain of youth, rocking in typical Pussy style.

Blaine Cartwright is rightly proud of and unmistakably happy about the new material. “None of the previous Nashville Pussy albums have been as diverse and at the same time consistent. Everything sounds even bigger and better, yet raw and authentic through and through. This is our ‘Back In Black’!”

Nashville Pussy came together in 1996, and ever since the band has been performing a strenuous annual gig marathon, touring with acts like Lynyrd Skynyrd, Reverend Horton Heat and ZZ Top as well as playing festivals like Wacken Open Air. Classic albums such as ‘Let Them Eat Pussy’ (1998), ‘High As Hell’ (2000), ‘Say Something Nasty’ (2002) or ‘From Hell To Texas’ (2009) have caused an international stir, and their single release “Fried Chicken And Coffee” earned the band a Grammy Nomination in the late Nineties in the category ‘Best Metal Performance’.

‘Up The Dosage’ will be released as a limited digipak edition (including two bonus tracks and a poster), double gatefold LP edition with colored vinyl, standard version and download.

Nashville Pussy will be touring in Europe in early 2014, for a complete list of dates visit www.nashvillepussy.com.