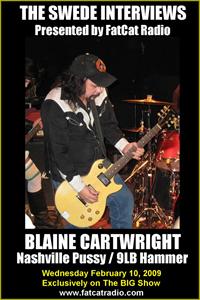 The FatCat Radio Network (www.fatcatradio.com) will be airing an exclusive interview with Blaine Cartwright of Nashville Pussy / Nine Pound Hammer on The BIG Show hosted by One Angry Swede this Wednesday February 10, 2010. The BIG Show airs from 7pm – 10pm CST. The interview is slated to begin at or around 8:00pm.

Blaine discusses a number of topics at length in this wide ranging interview including: Nashville Pussy’s upcoming European tour, their current album ‘From Hell To Texas’, future plans for the Pussies and Nine Pound Hammer, as well as Japanese beer, Elvis, the internet, and Atlanta Hawks basketball.