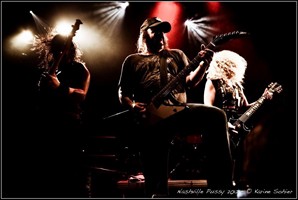 Nashville Pussy have completed tracking their upcoming album, the follow-up to 2009’s ‘From Hell To Texas’, at Nitrosonic studios in Lexington, Kentucky. The album, slated for release sometime in 2014, will be the Atlanta rockers first with new bassist Bonnie Buitrago.

As lead guitarist Rutyer Suys puts it, the recording was “a slam bang wham bam fuck you man in and out! Everyone was in the zone, pent up and eager to lay down some insanely intense rock ‘n’ roll. Jeremy (Thompson, drums) was more focused and demanding than I’ve ever seen, Bonnie, the Virgin (her first time recording with us), was determined and diligent in setting the bass bar even higher. And It turns out — she’s got a fucking great voice!! Blaine (Cartwright, vocals/guitar) as always came up with some outrageous lyrics and delivered them with a new found swagger. I personally was channeling some serious demons and I think it shows, I even impressed myself. We’re still mixing but I think this is the most ALIVE album we’ve ever done. SPV is releasing a few singles before its release in 2014 with a big Euro tour to follow.”

After the amazing success and ease of this Nashville Pussy recording Blaine is on a creative roll and wants YOU! Blaine’s ‘other’ band, The Kentucky Bridgeburners, are hell bent on getting back into the studio to record their second album and they want the fans to be a part of it. Check out how you can be involved at www.kickstarter.com/projects/blainecartwright/we-want-to-make-a-great-rock-n-roll-record.

Also, bassist Buitrago is on tour right now in Europe, with her ‘other’ band Jeff Hershey and the Heartbeats — a punk and soul revue that have been kicking ass in France and Spain so far. Their tour dates can be found at jeffhersheyandtheheartbeats.com.