Nasty Habit band members and brothers, Tommy Ende (lead vocals) and Kenny Ende (guitar), have released a video on Youtube of their acoustic rendition of Bon Jovi‘s “It’s My Life.”

Nasty Habit have released two albums to date: the full length album Nasty Habit in 2012 and the EP Desperate Times, Desperate Measures in 2014. 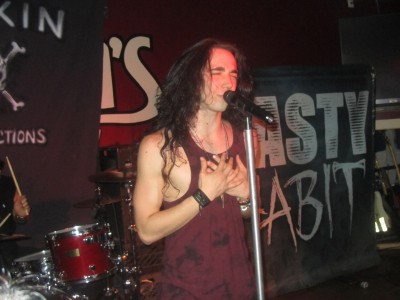 Sleaze Roxx caught Nasty Habit playing live at the M3 Pre Party in Columbia, Maryland on April 30, 2015 and stated the following in its review of that show: “These four young guys put on what I consider to be the best performance of the night, particularly due to lead singer Tommy Ende‘s complete use of the stage and obvious comfort in communicating with the audience. Right from the start, it was obvious that Tommy Ende was very comfortable with being on stage.” Sleaze Roxx concluded in its review that: “What set Nasty Habit apart right away from the other bands on the bill is that the group had two banners with its band name on either side of the drum kit. While that might not seem like much, it gave a different visual look to their set compared to the other four bands. In addition, frontman Tommy Ende did not hesitate in repeatedly standing on the barriers between the stage and the audience giving again a different look to the band compared to the other four bands. Good for Nasty Habit for being able to distinguish themselves from the pack.”

The Ende Brothers cover Its My Life by Bon Jovi, acoustic of course! Enjoy! Please check out our band, Major Crush. @MajorCrushBand