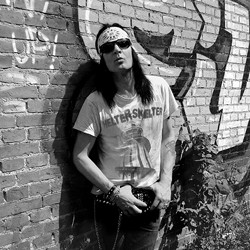 Nasty Idols frontman Andy Pierce passed away suddenly at the age of 45, although no details of his death have surfaced yet rumors speculate it was the result of a brain hemorrhage.

Nasty Idols guitarist Peter Espinoza confirmed the news by stating, “Andy my friend… I will miss you! We did make great music togehter.”

The band was formed in Malmoe, Sweden in the summer of 1987 by Pierce and bassist Dick Qwarfort and in 1988 they released their first single “Don’t Walk From Love”. With the release of their debut album ‘Gigolos On Parole’ in 1989 the band started to earn the reputation of being one of the hottest new rock acts in Scandinavia. Their second album, ‘Cruel Intention’, turned out to be a lucky strike for the band. It was recorded in 1990 between gigs and tours just as the L.A sleaze/glam rock scene was at its peak. With the release of ‘Cruel Intention’ in 1991, Nasty Idols became an icon in the genre and the number one sleaze rock band from Scandinavia, while the music videos for “Cool Way Of Living”, “Can’t Get Ya’ Off My Mind” and “Trashed N’ Dirty” saw steady rotation on MTV Headbangers Ball.

While other bands in the genre were giving in because of the grunge hype and loss of popularity, Nasty Idols carried on with their rock n’ roll crusade and released ‘Vicious’ in 1993. The album spawned two music videos, “Heads Down In Tinseltown” and “Ain’t Got Nothing”. The Nasty Idols eventually disbanded in 1995 just as recording of the fourth album ‘Heroes For Sale’ was completed. During this time Piece founded Machinegun Kelly and United Enemies.

Nasty Idols re-united in 2006 for the ‘Rejects On The Road Tour’ and followed that with the comeback album ‘Boys Town’ in 2009. Thei band’s final studio album, ‘Kalifornia’, was released in 2012.

“How horrible. The singer of a band we supported years back — Nasty Idols — just died totally unexpected,” said Spit Like this singer Lord Zion. “So young, only a few years older than me. Can’t claim to have been best buds or anything but it sucks and my heart goes out to Nasty Idols — they were great to a young band. Life is short and you never know when it might end — don’t waste a SECOND. Do what your heart wants and don’t hold back on adventure. You regret the things you don’t do… so just do it!”

“Many may know him as lead singer for Nasty Idols but our fondest memory is from his ’90s side project Machine Gun Kelly.” said the members of Sister Sin. “We actually got our band name from one of his tracks on their killer debut, and only album, ‘White Line Offside’. Great stuff indeed! Anyhow, R.I.P Andy and keep rockin on that other side.”

“I had the pleasure of having Andy work with me on many Nasty Idols CDs for Perris Records and also at Sweden Rock festival,” shared Perris Records founder Tom Mathers. “Andy was a really talented person who will be greatly missed. R.I.P Andy.”

“There is a lot of sadness in the world right now, as many sources of inspiration have begun their journey to the afterlife,” said the members of Spinning Jenny. “Nelson Mandela, Paul Walker, Andy Pierce, all had one thing in common… they all became heroes for a lot of people. And that’s how we all shall remember them… As heroes.”

“A good day suddenly becomes unpleasant when half of Facebook writes that Andy Pierce has passed away,” says Lukas Landero of The Itch. “I still hope that it’s a bad joke. You can say many things about Andy, but there was a guy with a big heart and great passion. In a society marked by tragedy, was Andy Pierce a clown. We need our clowns more than we dare to admit.”