Back in August 2017, infighting among the Nasty Ratz band members has led to lead guitarist Stevie Gunn, bassist Nikki Allin and drummer Rikki Wild all departing from the group leaving only frontman and founder Jake Widow as the lone man standing. The trio went on to form the group Double Raw with singer Peter Duff. 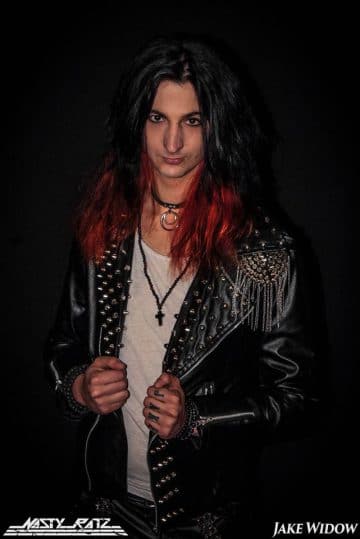 Widow chose to forge ahead with Nasty Ratz and has recruited a new band line-up, which will be releasing a new single titled “Poetic Justice” on February 10, 2018.

Widow was recently interviewed by The New Wave of Hair Metal‘s senior admin Tom and asked what happened to which the singer replied (with slight edits): “Well, as you might have seen. The line-up changed completely. The guys literally told me I’m not good enough to be part of the band they play in. It taught me a lot. I started practicing a lot. I take lessons 2-3 times a week now. And I learnt that if you can’t get on with a member of your band, it’s pretty bad idea to let it be just because of the way he can play . Nevermind, I love their new tune and I believe we have a cool relationship. But now, there is only way to make that… I work every day to be a good frontman and to have a great band. There is no time or space for thinking about revenge or shit like that.”

In terms of the new Nasty Ratz band members, Widow advised (with slight edits): “Xriss and Mick have been long-time fans of Nasty Ratz. When I called them, they accepted my offer with no doubt. KK is kinda the guy who loves to play but he’s not much into the genre. He can play everything and he’s a cool person though. Mick brought him from the conservatory he studies. KK promised to move NR to the next level and keep it going. The guys are great. Unfortunately there’s not enough time to rehearse every day etc. But when we do, it’s great. No rhythmic fails or something. Therefore, they are great musicians and also very good singers.”

With respect to whether Nasty Ratz will be changing their glam metal sound exhibited on their debut album First Bite, Widow stated: “Kinda yes. We changed tuning from D sharp to D… That’s what we wanted to do with the old line-up as well. So it all sounds a bit darker but also there’s new space for me to sing the high notes. But the guitars are still sharp as knives. We are still the NWOHM band though.”

In regard to what Nasty Ratz‘s new single “Poetic Justice” is about, Widow advised: “Well, the song is very personal for me. I’m not sure if there’s any more personal thing. A lot of bad shit happened to me in 2017. The death in my family, break-up, former members left etc. And I’ve been always very sensitive. But I decided not to write about those specific things but about feelings, they had brought me. Because we all can easily forget the bad shit but we don’t forget the feelings. I this is something I really want to sing in next X years. And I want to sound as authentic as possible.”

You can read the rest of the interview with Widow at The New Wave of Hair Metal‘s Facebook page.