The New Wave of Hair Metal recently interviewed Nasty Ratz frontman Jake Widow and asked how the band’s new material is coming along. Ratz advised: “It’s the hardest thing about it all. We have some songs but we are sure we can do better. So, we are just working hard. Definitely stay tuned.” 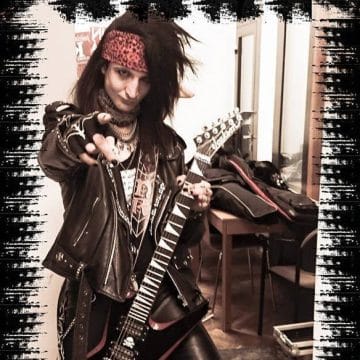 In terms of when we can expect a new Nasty Ratz album, Widow stated: “Hopefully, at the end of the year. But we don’t wanna come with something non-perfect.”

With respect to how Nasty Ratz got started, Widow advised: “Hey man. We’ve been together for almost 5 mother fuckin’ great years 😀 I can’t believe it. We had experienced some changes in the line-up, played in many countries, recorded one EP and one LP. It’s been wild years. Our first EP “I Don’t Wanna Care” was composed a year before Steve came. I did it all by my own and that is probably the reason we don’t play 2 songs from it anymore 😀 Nevermind, it was quickly sold out and opened the door for upcoming “First Bite” album. There were two videos we recorded. “N.A.S.T.Y.” was shoot in Hot Peppers, a strip club that still supports us. “Made Of Steel” was crazy. We didn’t have much money, much time etc. We just believed in that song. And it worked, I guess. Playboy wrote 3 fuckin’ sites just about the clip. 3 sites! Seriously! 😀 Still cannot believe that. “Price Of Love” was different. We wanted to get it into TV. All the stations were like: “Pay, or record something professional”. We hired Beau Hill for the song, Balkins (great director) and ZlyArt to get the models. Also, we decided not to play in a club or a ring or something. We decided to jump on regular stage and just rock as hard as we could.”

You can read the rest of the interview with Nasty Ratz singer Jake Widow at The New Wave of Hair Metal‘s Facebook page.