Norwegian sleaze rockers Nasty Reputation consisting of frontman Tommy Gunn, guitarist Lars The Heat, bassist Billy McBarbie and drummer Cpt. Baard have released a video for their single “Slut Machine” from their upcoming debut album After All It’s Rock N Roll. The video was shot by Tobby Johansen at the Naked Hollywood Studio in Trondheim, Norway. 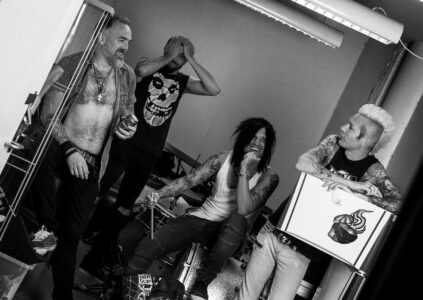 “Scoring higher on STDs than on SATs, Nasty Reputation is exactly what they claim to be; and sometimes even worse.

Nasty Reputation has been around the block since back in 2007. But more than anyone, this lovechild of punk and metal has suffered from a severe case of the childrens disease known as «frequent line-up changes». Despite the constant uphill struggle, the head of nastiness himself, Mr Nasty Anderson, has managed to put together several demos and even some occasional gigs in venues and festivals all over the country.

The current line-up is not just the most good looking bunch of puppets around, but they’re also the nastiest and most talented this band has ever been. With a hard hitting, growling essence of early 80s metal, in the alleys of WASP and Mötley Crüe, combined with the straight forwardness and melodic sense of bands such as The Wildhearts and Backyard Babies; Nasty Reputation represents something unique. Not that anyone hasn’t done it before; it’s just that somewhere along the way this magical thing went out of fashion!

Lock up your daughters, and release your moms. It’s time to pop the real question: «Are you nasty??»”