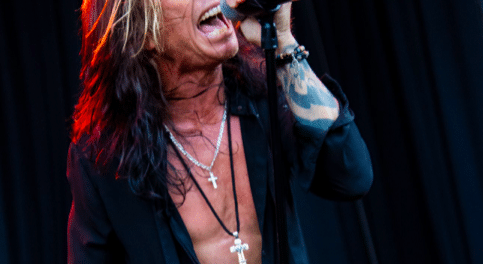 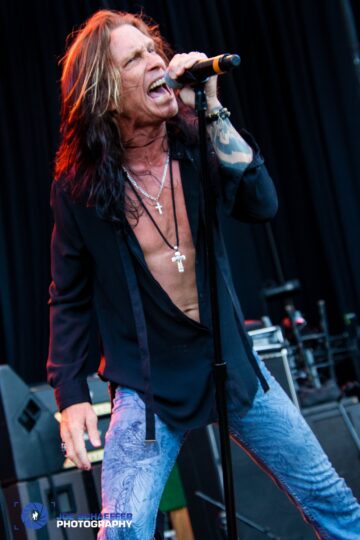 Wall mentioned that Utz had previously indicated to him at the BLE Masquerade Festival that was held back in July 2022 that he was going to go to Nashville, Tennessee, USA to write some new material for Resist & Bite. Utz indicated (as provided by Sam Wall): “Yeah yeah yeah. We did some stuff in Nashville. And then we actually recorded some stuff as well in Atlanta at my house and the warehouse that we rehearse at.”

In terms of how Resist & Bite‘s new material differs from the songs on their 2021 album, Utz opined: “We’re leaning a little more towards a more modern sound. And we’re kind of exploring, ya know? We’ve got so many different mind’s eyes in the writing program of this band, that go North, South, East, and West. Yeah, we’re just experimenting on different sounds and genres of music, we don’t wanna just stick to one kind of sound you know what I mean?”

Utz added: “We’re exploring and we’re finding that we’re coming up with some pretty cool stuff man. You get tired of playing the same kind of thing over and over again, so you start venturing out of your comfort zone, and it’s really cool.

Me and Tommy (Skeoch), two weeks ago he flew up to Atlanta, and we just started writing. He had some riffs and there was stuff that he wanted to kind of explore, and then there was some stuff that (Steve) Stokes (guitar) had already had that we were looking at. So we wrote like 4 different tunes, these four songs in a couple of days. It’s funny Sam, if you were to give that disk of all four of those songs to an A&R guy… he would look at us and go ‘so which band do you want me to sign?’ Because it’s four completely different genres of music.

So again we’re just exploring, but we’re leaning more towards a little more of a more modern industrial type sound. Some of our heavier influences and some of our lighter influences are starting to shine out in some of this new material.”

You can listen to the nterview with Nathan Utz by Sam Wall below: